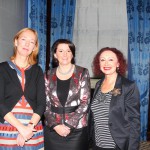 “If you want something to be done, you need to ask a woman” said Atifete Jahjaga with a smile during her speech at the “Ladies Lunch” and thereby immediately won the guests over. The President of the Republic of Kosovo visited Germany in October and did not only attend the official meetings but also got to know the society in Berlin better.

Therefore the Ambassadors Club invited guests from politics, culture and economy to a lunch in honor of the President. Cornelia Yzer, Berlins Senator for Economy, Technology and Science, welcomed Mrs. Jahjaga to Berlin. Senator Yzer and the President agreed that international exchange is important for their home countries. Emily Haber, State Secretary of the Federal Foreign Office, and Karen Christensen, Minister-Counselor of the US-Embassy, also took part in the “Ladies Lunch”.

President Jahjaga did not only inform the guests about the current situation in Kosovo but also discussed the role of women in society worldwide. Mania Feilcke-Dierck, President of the Ambassadors Club, and President Jahjaga also talked about the question which topics are particularly important for women nowadays and how one could support them. One aspect oft hat was health care and especially the prevention of breast cancer.

So the idea was developed to maybe plan further common projects on that in the future.

Tagged on: Republic of Kosovo